The author's collection of agaves and how he first began to grow them.

The most succulent of the Yucca species, together with the amazing pollination system of Yuccas.

An overlooked plant in the author's collection bursts into flower.

A constellation of Astrophytum

Astrophytum are easy plants to cross-pollinate which has led to some fantastic cultivars, many originating in Japan.

How the prized Saguaro is protected from theft. But some of those you see might be faked.

Part 1 of a day by day diary of a three week journey to Chile.

Autumn in the USA

A trip to the Arizona Desert Botanical Garden in Phoenix.

A grower experiments with Acadama, baked and aerated clay, in an effort to find a better potting mix.

An introduction to the cactus collection held at Chester Zoo which includes national collections of Copiapoa, Matucana and Turbinicarpus.

An exceptional plant in the author's collection.

Gardening with succulents – Creating your framework

Part 2 of Paul Spracklin's series of articles in which he describes the larger plants that form the framework for a garden.

A naturally pendant species which grows well, if rather untidily, and flowers throughout the summer.

Found in any garden centre a look at a possibly much underrated plant.

A look at the genus Turbinicarpus with cultivation notes and some interesting hybrids.

A sounding of silence

A trip to the Organ Pipe National Monument in Arizona produces an unforgettable experience of quiet contemplation.

A look at chimeras and how they are produced.

Aeonium enthusiast Roger Mann talks about the aeoniums in his collection.

How long will cactus seeds live?

In cultivation cactus seeds can survive a long time in the right conditions. Taken from

This year's Cactus Crawl to Germany and Holland.

DNA technology has changed the classification of rebutias. Ivor Crook asks are there answers, or simply more questions?

An introduction to Paul Spracklin's six-part series of articles on exotic gardening.

Profile of this unusual plant with pretty scented flowers.

Some of the gasterias in the author's collection and how he became interested in these fascinating plants.

Always popular within the hobby, some plants exhibit true variegation, but some can suffer 'false' or 'stress' variegation. 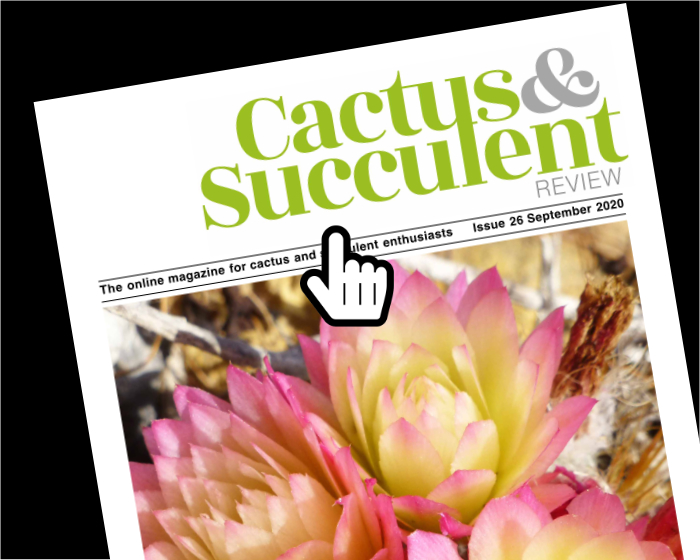